Light refreshments will be available.

Dr Ciaran O’Reilly – Evictions in Westmeath in the Nineteenth Century 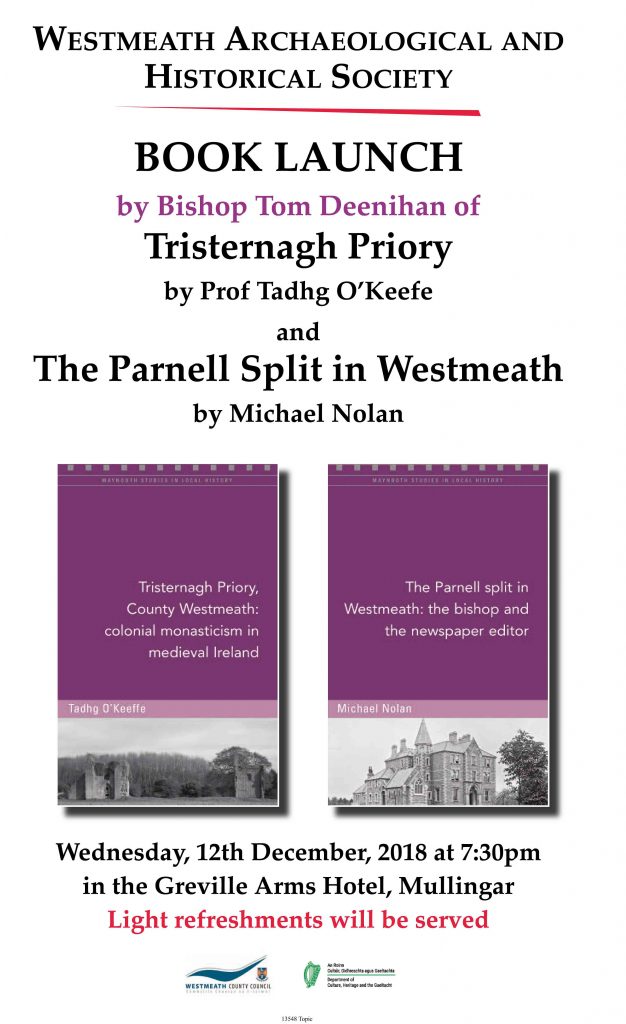 Dr David McCullagh is an RTE Broadcaster and has a PhD in Politics.

He is the author of A Makeshift Majority: A history of the first Inter-Party Government, The Reluctant Taoiseach: A biography of John A. Costello, and De Valera,

Volume I: Rise and De Valera, Volume 2: Rule (to be published this October). 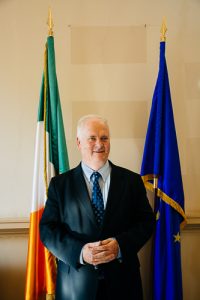 dress the fortieth anniversary of the founding of theWestmeath Archaeological and Historical Society at 8 pm in the Greville Arms Hotel. He will talk about one of Irelands most influential leaders Mr. John Redmond the last leader of the Home Rule party.

The Westmeath Archaeological and Historical Society was founded in Mullingar in 1978 with the aim of remembering, celebrating and supporting our heritage.

Throughout the intervening forty years the Society has been very active in a wide variety of involvements – lectures, outings, publications, annual conferences and supporting the Westmeath Barrows Project, pioneered by the late Professor Michael Herity.

This lecture is part of the Decade of Centenaries lectures which is supported by Westmeath County Council. On Wednesday November 14 th Dr David Mc Cullough the RTE broadcaster, will examine the role played by former Taoiseach and President Mr. Eamon De Valera in the years leading up to the Treaty in 1921.

Wednesday 19 October 2016; Greville Arms Hotel at 8.30pm. Dr Michael Kennedy will deliver a lecture: The Torpedoing of the Arandora Star off County Donegal.  Dr Kennedy is Head of the RIA’s Documents on Irish Foreign Policy Series and has regularly broadcast on radio and television.

Wednesday 9 November 2016; Greville Arms Hotel at 8.30pm. Dr Kieran O’Conor will speak on the subject: Rindoon Castle, an Anglo-Norman fortress on Lough Ree.  Dr O’Conor is a senior lecturer on archaeology in NUI Galway and has published on subjects including castles, medieval rural settlements and Gaelic Ireland.

Friday 24 February 2017; Greville Arms Hotel at 8.30pm. Dr Patrick F Wallace will deliver a lecture: The National Museum – Past, Present and Future. Dr Wallace served as Director of the National Museum from 1988 to 2012 and supervised the excavation of Viking Dublin as well as developing new museums at Collins Barracks and Turlough Park in County Mayo. This lecture by Dr Wallace is in honour of his fellow archaeologist, the late Professor Michael Herity MRIA who gave lectures on many occasions to the society.

Saturday 8 April 2017; Greville Arms Hotel from 9.45am to 3.30pm. Second annual Historical Conference. Admission 20 euro includes teas, lunch and attendance at all talks. The list of speakers is as follows:

Justin Moffatt – Some Westmeath Artefacts in the National Museum.

Ireland and Westmeath in 1918.

2.40- 3.30 Ronan McGreevy ‘Wherever the Firing line extends; Westmeath and the Western Front’